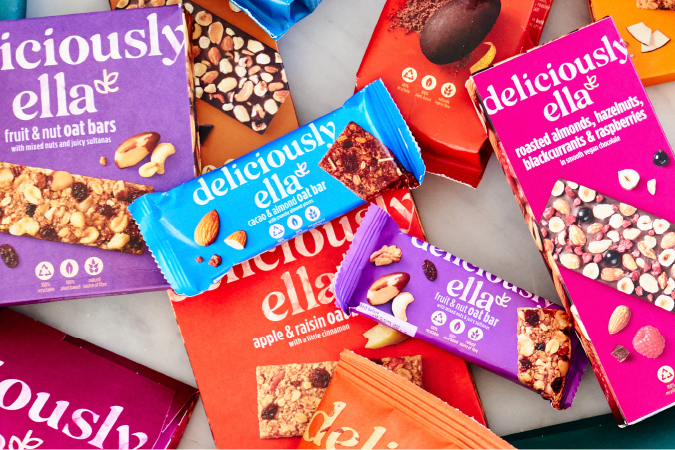 Ella Mills didn’t start out looking to build a plant-based food empire. In 2011, at age 19, Mills was diagnosed with postural tachycardia syndrome, a condition that affects the workings of the autonomic nervous system, and when the prescribed medications didn’t have the desired effect, she began exploring whether a change in diet and lifestyle may be able to help.

The resulting journey into a whole-foods, plant-based diet turned into the recipe website deliciouslyella.com, where Ella began documenting her kitchen adventures. When a real audience for her recipes developed, the “deliciously ella” mobile app followed, which went to No. 1 in the food and drink charts. Then, in 2015, Mills released her first book, which went on to become the best-selling debut cookbook of all time.

It was clear that she was on to something, and soon Ella and her husband, Matthew Mills, opened a café in London to share the benefits of a plant-based diet and bring delicious plant-based food to a wider audience. By this time, a growing audience adored those recipes, and the café could only reach so many people.

On from the success of the café, Ella and Matt began thinking about how they could reach even more people and decided to launch their food product business. It started with their first product, the Cacao & Almond Energy Ball, which was listed in around 6,000 stores throughout the U.K. and Ireland, including Starbucks and Whole Foods. The effort has evolved into global distribution of everything from those Energy Balls to breakfast cereals, chocolate bars and frozen desserts, with lots more to come

In other words, it wasn’t a system on which a growing, global business could rely.

“We needed to address being more international and be able to consolidate a wider business structure than we were able to,” said Finance Director Sally Tuhami.

Adding to the pressure to update its financial system was the fact that deliciously ella was fast approaching the size at which the U.K. would require it to undergo external audits.

“Being audit-ready is about having clear and documented controls and being able to demonstrate who’s done what,” said Tuhami. “I wanted us to be future-proofing ourselves.”

Tuhami was also certain of one other thing: She did not want the company to end up choosing a mid-range product it could more readily afford but would have to replace in a few years. She joined a group of peers facing similar issues and conducted a review that included looks at Microsoft Dynamics and SAP. Ultimately, she was steered toward NetSuite, which had the capabilities she wanted.

Upon going live on NetSuite, the change was immediately evident:

“Being able to see our stock activity by customer — we’ve never had that ability before, so that’s really fantastic,” said Tuhami. “We’re a small team, and now when people aren’t at work, we can still get things done and know what’s going on.”

Tuhami knew that NetSuite was going to be a significant change to the deliciously ella business. Before implementation, she fretted about whether to take on the deployment, and the widespread change it would bring, along with the other growing pains the company was experiencing. But a technology refresh was needed, and Tuhami has no regrets about her ambitious decision.

“We picked a really sensible time [to deploy an ERP system],” she said. “If we’d have given it another year, we would be massively creaking at the seams. We needed to do this to make sure the business was positioned to move forward.”

Positioned to move forward, deliciously ella is. After deploying the advanced software, the team plans to continue exploring the benefits of the system.

Tuhami wants to see more efficiency gains by constantly taking stock of how the company is using NetSuite and refining processes. For example, she wants to improve the way the company uses NetSuite to manage bank reconciliations. Down the line a bit, Tuhami looks forward to setting up multi-currency subsidiaries in NetSuite OneWorld.

And while other plans for the business unfold, Tuhami can operate with confidence that deliciously ella’s technology will more than hold its own, providing a palpable sense of relief.

“I feel like we will be able to easily consolidate across currencies,” she said. “NetSuite is going to grow with the business brilliantly.”